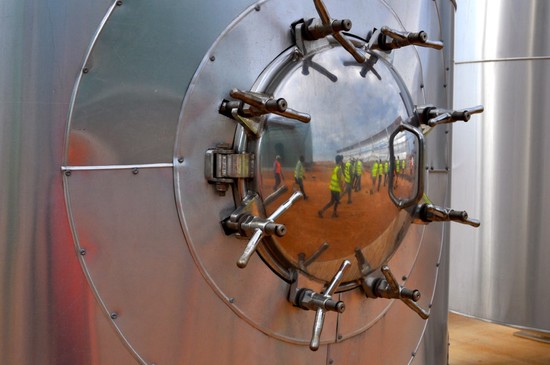 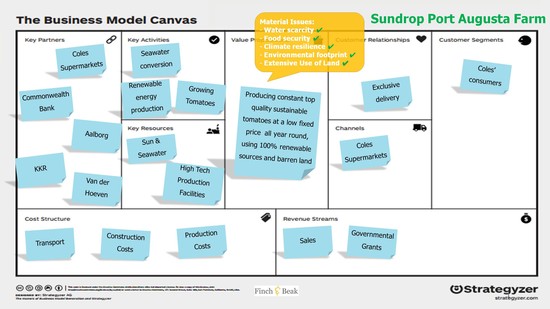 Enlarge
Publ. date 9 May 2017
The urgency to create systemic change is steadily increasing, and so are live cases that prove that sustainable agriculture is building its momentum. One of the convincing cases is Sundrop Farms, an innovative leader in sustainable agriculture, growing fresh fruits and vegetables using renewable inputs to create a circular economy business model.

The Elephant In The Boardroom WRI 2017.pdf

Millions of people around the world have limited access to quality food to meet their basic nutritional needs, increasing production requiring even more water, land, pesticides, and fertilizers is an unsustainable solution. And by 2050 rising population is forecasted to increase its food demand with 50%. Climate change is increasing the number and the severity of catastrophic weather events. Water scarcity is becoming more acute; in many places an increasing demand for water is already exceeding the capacity of local reservoirs and groundwater aquifers. Predictions show that by 2030 more than 50 countries will be facing medium, high, or extremely high water stress of which 70% of fresh water is used for agriculture. If we have to feed the 7.2 billion people who currently live on this planet, let alone the projected number of over 9 billion in  2050, systemic change is needed.

The latest WRI Working paper “The Elephant in the Boardroom: Why Unchecked Consumption Is Not an Option in Tomorrow’s Markets” addresses the fact that current innovation is not keeping pace with global consumption and its expected rise.

Where a conventional greenhouse uses groundwater for irrigation, gas for heating, and electricity for cooling, a Sundrop greenhouse turns seawater and sunlight into energy and water, and uses sustainably sourced carbon dioxide and nutrients to maximize the growth of the crops. Since the production methods used do not require any soil, infertile and barren land can be used to produce an abundance of fruits and vegetables. Today traditional agriculture methods struggle to produce, the yields are 15-30 times higher per hectare than conventional field production, resulting in a zero C02 output. The savings are massive: on an annual basis, Sundrop Port Augusta Farm manages to save 16,000 tons of CO2 and 365 million liters of water.

Through rigorous control of the climate and irrigation inside the greenhouses all fruit and vegetables have exactly the right levels of nutrients, light, water, temperature and carbon dioxide needed to thrive. Plants are grown hydroponically (not using any soil) using nutrient rich coconut husks instead. Although Sundrop uses insects to control pests, it turned out that they’re not so fond of the saltwater that is used to cool the greenhouses preventing them from flourishing altogether.

The first pilot farm started in South Australia in 2009 with only 2 people in an area with no fresh water, characterized by its degraded territory and with an extreme climate. After operating from a pilot greenhouse facility for six years they were able to see the “fruits” of their labor. Backed by 6 million AUD (Australian Dollars) of State Government funding, a 10 year contract from Coles and investments of more than AUD $150 million from KKR, CBA, and Challenger Life, Sundrop embarked on a 20 hectare expansion of its horticulture creating around 300 construction and onsite jobs.

In 2016, the 20 hectares of greenhouses were completed in Port Augusta using a high-tech solar tower, measuring 115m in height, that has 23,000 mirrors pointing towards it. The water comes from the Spencer Gulf, and is desalinated through a thermal desalination plant that not only produces energy to power the plant growing systems, but also to heat and cool the greenhouses.

At current, the Australian farm exclusively produces tomatoes for Coles Supermarkets which can be found in stores nationwide. Since the growing conditions are 100% controlled, the quality of the tomatoes is at a consistent high level all year round. The total amount of produce adds up to 17 kilotons annually, representing 15% market share nationwide in Australia that is delivered to Coles Supermarket at a fixed price and based on a 10 year partnership agreement.

2016 Year of the global roll-out of Sundrop Farms

After a typical approach of piloting and improvements during the first years, in 2016 the scale up of Sundrop’s  innovative concept materialized. After the completion of the 20 hectare farm in Australia, the first farm in Europe was build in Portugal in 2016, where the company’s technology and expertise is now used to produce peppers. Also, in Tennessee a brand new farm was build based on the same concept but concentrating on growing berries. The roll-out was feasible by the unique coalition of global strong partners such as investment firm KKR, solar power boiler systems and technologies company Aalborg SCP, and Van der Hoeven, a specialist in intelligent greenhouse solutions.

Transformation of the industry’s existing value chain model can provide novel opportunities for sustainable innovation. The case of Sundrop Farms shows that this transformation can also stimulate circular economy thinking. Sundrop changed the traditional way of farming by developing a new way of farming using the abundance of Australian sun and sea water as a  resource in its production process and by growing and delivering  tomatoes in a long term partnership with its exclusive customer Coles Supermarket. Sundrop showcases a coalition of partners to increase scalability of its business model.

Based on the Business Model Canvas, Finch & Beak has developed a process for the creation of business models that are focused on sustainable innovation. Key elements in our approach are business design thinking, open innovation and circular economy transformation. In case you want to develop your own success story of disruptive change, contact Jan van der Kaaij, managing partner at +31 6 28 02 18 80 or jan@finchandbeak.com.