The state of the Dutch motorways in 2028: ways to the future 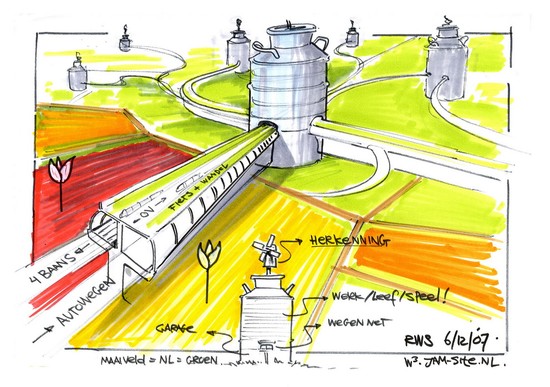 Enlarge
Publ. date 6 Jun 2008
Within the innovation programme ‘Ways to the future’, Rijkswaterstaat, the Dutch governmental organisation for maintaining and developing the motor ways, wants to involve the Dutch public at the design of the roads: what do road users and people who live near motor ways find important? “You have to find out what matters to your stakeholders”, says project leader Wil René Jansen. “Together with Finch & Beak, we conducted research to answer this question. We deliberately have chosen to work with an external consultancy in order to be able to think outside the box.” With the help of Finch & Beak, Rijkswaterstaat started a dialog with its external stakeholders, such as professionals, civil servants and citizens to identify their wishes and demands for now and for the future.

The most effective way to identify stakeholder’s needs is to involve them at the development of products and services. By asking customers what they want and by letting them participate, they will feel connected to a product or organisation. Consequently, the chances of success increase. The way in which people use the motor ways is so embedded in our culture that it is quite difficult to come up with new ideas: when you ask people what they want in 20 years, you get the answer that they want to be able to go from A to B without delay. Therefore, the biggest challenge was to come up with surprising and renewing solutions.

After an inventarisation of what Rijkswaterstaat already does to involve the public at its work, research together with USP was conducted in which opinion leaders and various different groups of stakeholders were involved. The subjects they came up with were presented to larger groups. Finally, Finch & Beak organised a group discussion with participants from different backgrounds, among whom employees of Rijkswaterstaat, creative thinkers, road users, people who live across motor ways and representatives of municipalities. They transformed the subjects into concrete projects. A number of ideas was really striking: from a double layered road and building above the road to the creating of fast and slow lanes.

According to stakeholders, the most important subjects Rijkswaterstaat has to deal with are robustness of the road, climate adaptation and value creation. “Robustness has to deal with predictable travel time”, Jansen explains: “Unpredictable traffic jams cause irritations. Currently we deploy several projects to deal with this and therefore we won’t adopt this subject in this programme.” Climate adaptation is another priority. While anticipating on the expected rise of the sea level, Rijkswaterstaat is working hard to keep roads accessible. Apart from this, there is currently running a project to diminish the consequences of a possible flood.

Multifunctional use of the road

In the area of value creation there are steps to undertake, in particular for people who live across a motor way.  Jansen: “How can we develop the road and the surroundings in such a way that we create value for them?”

Out of the group discussions literally hundreds of ideas were brought up. These were distilled to twenty ideas which led to one or two pilots. Many ideas go into the subjects of the multifunctionality of the roads, for example by putting a cinema or office at a petrol station. Other ideas relate to the human measure. It’s quite nice to look at a motor way when you look at it from a high position. When you’re right next to the motor way, the traffic goes by too fast to enjoy it. The solution is either to increase the distance or to decrease the speed. Regarding the first pilot around the Dutch motor way A20, a study to research value creation is started.

It is clear that a thinking process where several stakeholders are involved, produces a lot of value.

If you want to know more on the facilitation of stakeholder workshops, please contact Josée van der Hoek, senior consultant at Finch & Beak via +31 76 522 28 17 or josée@finchandbeak.com.