Enlarge
Publ. date 7 Sep 2011
Recently, the Clean Fleet program was launched in the US: a public-private collaboration, initiated by the Obama administration aimed at reducing the fuel consumption of large American companies. Making use of electric vehicles, alternative fuels and fuel-efficient measures, large companies such as Coca-Cola, Enterprise Holdings, Staples, General Electric, Ryder, and Osram plan to accelerate their sustainability efforts. The program contributes to the government’s target of importing a third less oil by 2025.

Frontrunners in logistics are taking the lead to further reduce the American Co2-emissions. Coca-Cola holds the largest hybrid fleet of North-America and has been training its drivers for quite some time in environment friendly driving styles. Furthermore, they plan to start using hydraulic hybrid vehicles before the end of this year. General Electric also plans to make half of their fleet electric, while Ryder saves 5.6 million liters of diesel each year by switching to LNG trucks.

Pilot sustainable logistics in Brabant
With the extensive logistic sector in The Netherlands, doing nothing is not an option. Logistic suppliers are becoming more aware of the utility of a solid sustainability strategy. The economic benefits are getting clearer. Meanwhile, acting more sustainably is an important contribution in the development of a positive reputation for the sector; as a supplier but also as an employer. Therefore Midpoint Brabant, a regional economic collaboration program, took the initiative to help local logistic companies in becoming more sustainable. In the project ‘Kompas Duurzaam Goederenvervoer’(Compass Sustainable Transportation), a total of eight logistic companies are being supported in the development of a vision on sustainability, that offers clear benefits for the company and that are monitored with measurements and reports.
Good example of public-private collaboration
Finch & Beak and NEA guide the eight pilot companies, including Peter Appel, GVT, C. Huybregts and P&M, on their quest to sustainability. In this process, they are supported by the lectureship Logistics and Sustainability of the NHTV Academy for Urban Development, Logistics & Mobility, Eco-systems, Dinalog and Midpoint Brabant. From the principle ‘to measure is to know’, an insightful internal and external report is developed, based on GRI. Subsequently, a sustainability strategy is developed and will actually be implemented. With these actions, the companies show that they are actively working on sustainability not only to reduce expenses, but also to improve the reputation of the company itself as well as that of the entire transportation sector. A start has been made on the road to sustainability!
For further information on sustainable logistics and strategic sustainability, please contact Josée van der Hoek via josee@finchandbeak.com or +31 6 28 02 18 80. 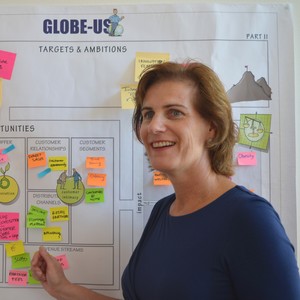 More about Josée
Read more on...
Related articles
TNT acknowledges the insufficiency of CSR reporting to the interests of fund managers

Investors miss the link between Sustainability and Risk Management

Electric toys for boys are changing the market