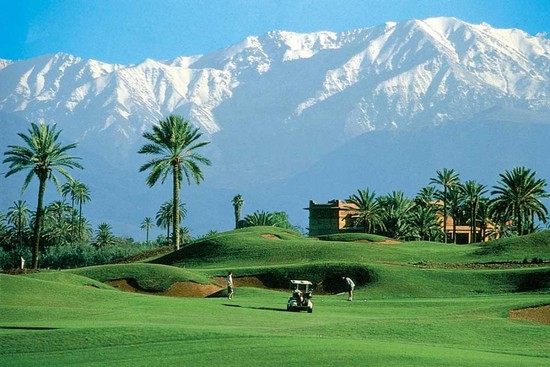 Enlarge
Publ. date 3 Apr 2012
Marrakech, the Moroccan Imperial city, is strategically located close to the Atlas mountains. In the early days, the city was the gateway to the Sahara desert and over the years, Marrakech developed into a unique touristic destination. An interesting destination also for golf tourism, showing the many golf courses around Marrakech. With 24,000ha, high summer temperatures, a total population of 950,000 people and nineteen courses, water is a valuable asset.

To protect the city’s environment, a public-private collaboration was initiated to collect all the wastewater from the city, treat the water and reuse it for instance for irrigation of the Palm groves of Marrakech and golf courses.

Mr. Daoudi, RADEEMA’s Director of Planification and Programmation contributes: “With such a project, an alternative and renewable resource is mobilized and permit not only to preserve the environment and conventional water resources but also to boost the development of golfing and ecotourism.”

In December 2011, the water treatment facility was officially taken into production. Every day, 110.000m³ of wastewater is collected, from which 90.000m³ is able to be reused. Within the treatment process, methane is used to generate electricity. The facility generates a daily amount of 30MWh electricity, which fulfills 50% of the total electricity need of the wastewater treatment plant. After treatment, the water is distributed through five pumping stations and 80km of pipelines that connects all golf courses.

The wastewater project in Marrakech not only guarantees efficient water use, but is also generating electricity for the wastewater plant. Another strong point of the Marrakesh approach is the stakeholder coalition for the project. The three main partners in the wastewater project (RADEEMA, government and golf courses) all made a significant financial contribution. The total costs of the project were 1.2 billion dirham (110 million euros) in which the Moroccan government contributed 150 million dirham, RADEEMA 596 million and promoters including golf courses 486 million dirham.

The treatment and re-use of Marrakech’s wastewater is a milestone in sustainable development, which brings significant benefits for the region on economic, environmental and social ground. With the project, Marrakech is able to further develop itself as an attractive touristic (golf)destination.

For further information on sustainability in golf, visit www.sustainablegolfproject.com