Science-Based Targets and Carbon Offsetting at the COP26 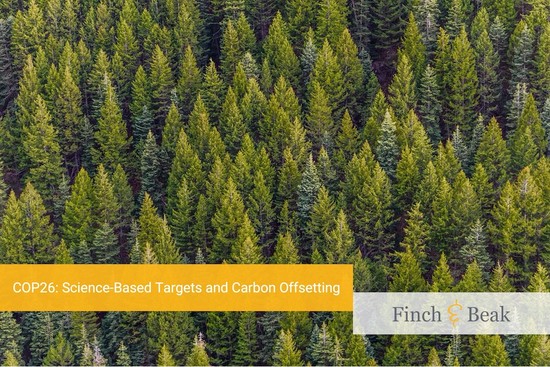 Enlarge
Publ. date 28 Oct 2021
Taking place in Glasgow from 31 October until 12 November, the COP26 summit brings together global leaders to discuss and agree on ways to accelerate action towards achieving the Paris Agreement and the UN Framework Convention on Climate Change. Ahead of the COP26, close to a thousand businesses committed to setting a net zero target in line with limiting global warming to 1.5ºC above pre-industrial levels.

Article 6 of the 2015 Paris Agreement set out the rules of how a global voluntary carbon market for carbon offsetting could look like. While carbon credits are already being traded on a global scale, the rules and mechanisms of the market are still not concretely defined.

As Barbara Haya, director of the Berkeley Carbon Trading Project at the University of California puts it: ‘Unless the loopholes are straightened out and the rules become much more stringent, there isn't much point having a global carbon market flooded with cheap, ineffective offsets.’

This is because there are many risks in operating such a market, for example avoiding double-counting credits (once for the country of the issuer, once of the buyer’s country), ensuring the concept of additionality (the emissions reductions would not have occurred if the project had not been implemented) and ensuring that carbon offsets last for the duration they have been accounted for, which can be up to a century.

To ensure that the efforts by companies to set science-based, net-zero targets have a real and positive impact on the state of climate change, the COP26 listed defining the rules for the voluntary carbon market as a main agenda item for the event.

Rules by regulators, commitments by companies

In order to come to an agreement on the rules for the voluntary market, business leaders, government and scientists are coming together during the COP26. The final rules however will be laid out by the regulators, while the commitment to act upon them needs to come from companies.

The urgency to act is once again highlighted by the 2021 Production Gap Report, co-authored by the UN Environmental Program. Published in July 2021, it finds that current emission reduction commitments by nations and companies do not meet the levels required to limit climate change to 1.5º. Therefore, more companies must rise to the challenge of setting climate targets that are aligned with the Paris. Luckily, the Science-Based Targets initiative (SBTi) has been created to assist companies with just that.

The SBTi translated the climate mitigation pathways laid out in the Paris Agreement into resources such as technical papers, target-setting tools and scenario analyses, which help companies to set science-based targets. A science-based target is a near-term emission reduction target that aligns a company to limiting global warming to 1.5º. Just in July 2021, the SBTi has removed the option of setting a science-based target which would allow for a 2ºC increase in global temperatures, given the latest research on global progress.

What’s more is that on October 28th, the SBTi is launching the world’s first science-based framework for companies to set net-zero targets. This is driven by the fact that the concept of net zero can be interpreted differently in terms of ambitions and scopes.

Therefore, the net zero framework aims to provide clarity through the SBTi’s September 2020 paper and ten initial recommendations. These describe two requirements that companies need to satisfy to reach net zero emissions as a company:

1) Reduce emissions along the value chain to the level that limit global warming to 1.5ºC with no or limited overshoot, and

The dynamics of a voluntary carbon market

The practice of offsetting emissions with purchased carbon credits dates back to before the turn of the century. The three major milestones in its development were the Kyoto Protocol of 1997, the 2005 EU Emissions Trading Scheme, which is still in force today, and the 2015 Paris Agreement. To date however, there is still widespread debate about the effectiveness of carbon offsetting in addressing climate change.

While proponents argue that commoditizing natural resources increases the economic incentive to protect them, opponents see it as a means to create a new market for a commodity. The debate intensifies around voluntary carbon markets, as the mandatory ones such as the EU ETS follow strict rules that ensure a functioning market, avoids double counting and gradually reduces (caps) the number of offset certificates on the market. This increases their price and incentivizes companies to perform structural investments to reduce their production of emissions rather than incurring repeating and mounting expenses from carbon offset purchases.

The global voluntary market, however, lacks the same level of regulation that mandatory markets exhibit. This is partly due to the sheer scale of such a global market: to date, the value of the voluntary carbon market is estimated to be just under $1 billion, but Baker McKenzie estimates it to grow to $50 billion by 2050.

Combined with the myriad of actors, such as companies, project licensors and projects themselves, this explains the difficulty in creating a robust set of rules that ensures ethical practices for the voluntary offsetting market but does not involve unnecessary amounts of red tape. These are the issues that the COP26 is aiming to address in its sessions and its decisions will be met with high expectations, on both sides of the debate.

What can you do?

While carbon credits have the same value on paper (1 carbon credit equals one ton of emissions), they largely differ in their effectiveness of carbon removal, reduction, or avoidance – hence their real impact on climate change. The outcomes of the COP26 will largely define how effective the global voluntary carbon market will be in reducing the total amount of GHG emissions in the atmosphere. The rules need to be clear to leave no room for loopholes and misunderstandings.

However, companies can already take a series of actions to ensure that their engagement in voluntary carbon trading are effectively addressing climate change. Here are five tips gathered from carbon certificate providers, the SBTi and industry experts:

Want to know more about how to align with and commit to a science-based target?

Get in touch with Josée van der Hoek, Director at josee@finchandbeak.com or call +34 6 82 04 83 01 to hear about how Finch & Beak can support you in setting a science-based target.

Photo by Matthew Montrone from Pexels

The Chemical Industry Has No Time to Waste