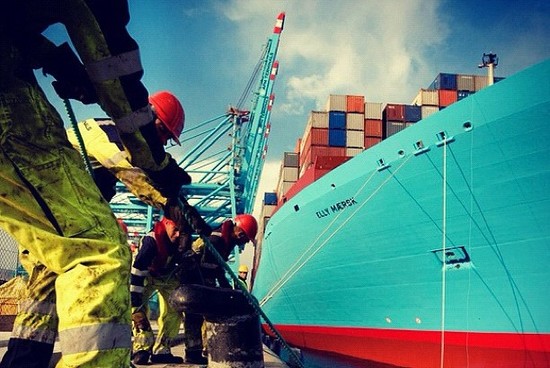 Enlarge
Publ. date 27 May 2015
How promising ideas and concepts may look on paper, in practice many eco-innovation products, services, technologies and processes still fail to make the leap from lab to market. It is because of that reason that the European Union decided to set up Horizon 2020: the biggest EU research and innovation program ever with nearly €80 billion of funding available from 2014 to 2020, in order to stimulate successful sustainable innovation.

That there are already a lot of inspirational stories to share is being recognized by the Spanish ‘Laboratorio Ecoinnovación’. As a spin-off of the University of Barcelona, they collect the most interesting cases on eco-innovation among different industries and markets, and describe the development of eco-innovation of that company. Maersk Line, Levi’s and Freixenet represent three successful examples of eco-innovation for inspiration towards implementing sustainable innovation.

The world’s largest ship being the most eco-friendly:
Maersk Line

The availability and price fluctuation of steel and fuel, and the growing interest in more sustainable transport made Maersk Line take action on improving their environmental performance. As a starting point the company concluded that the stages of building a ship and collecting the right materials are very resource-intensive. They realized that if they wanted to construct a more eco-friendly vessel, the design phase would be essential. In response, Maersk Line came up with two parallel projects: the Triple-E ships and the development of C2C (cradle-to-cradle) passport ships.

Maersk’s new line Triple-E will be the world’s largest ships, holding a record of 400 meters long and 59 meters wide. Triple-E stands for Energy Efficiency, Economies of scale, and the Environmental performance. Triple-E vessels are optimized for lower speeds, and thanks to its unique design, an energy-efficient engine and a system that uses exhaust gas to produce extra energy to help propel the ship, the Triple-E vessels are leading in energy efficiency. In addition, it breaks world records in ship capacity (18,000 containers, up to 16% capacity) without requiring more engine power, and the vessels are designed to facilitate the separation of its components in the decommissioning process. This helps to effectively process 60,000 tons of steel that is generated when a ship is being dismantled, which can be used to build new vessels. Looking at the environmental performance, Maersk’s Triple-E ships reduce CO2 emissions by 50% per container moved, compared to the industry’s average.

Due to Maersks continuing sustainability efforts, CEO Morten Engelstoft was invited in 2014 to join the UN Secretary-General's High-level Advisory Group on Sustainable Transport.

The production of sparkling wines following the traditional method are dealing with two factors that determine the success of the business and its operations:

The combination of these aspects creates complex logistics and restrictions for scaling up, as it has an influence on the production capacity, access to new markets, customer service over time and even food safety in itself.

Freixenet, one of the biggest Cava producers in Spain, automate their logistic system with robots to set up an eco-efficient process, and to be capable of producing more than 100 million of Cava bottles per year. The new technology for bottling and handling has resulted in a reduction of 25% of the organic pollution load (COD) of wastewater per unit produced between 2012-2014, and glass waste has been reduced by 7%. Next to the environmental benefits, Freixenet has increased its Cava production with 32,2% since the introduction of the robots.

Producing an average pair of jeans that gets a warn-in look, uses approximately 42 liters of water. When Levi’s analyzed their production process and lifecycle of jeans, they identified their large dependency of water and their significant contribution towards global water shortages. Enough reasons for Levi’s to make ‘reducing the water footprint of the company’ as their main priority. They developed an innovative new technique called Water

Got inspired and want to start working on sustainable innovation?

Please contact Bas Nuijten, Senior Consultant, at bas@finchandbeak.com or +31 6 28 02 18 80 to see how to spark sustainable innovation at your company.

3 Reasons Why Companies Should Start an Accelerator