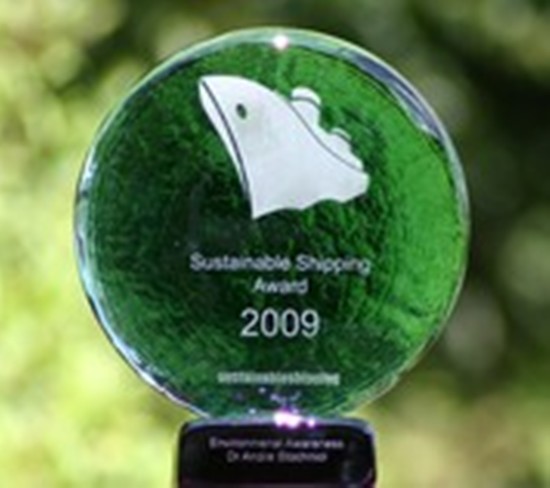 Enlarge
Publ. date 4 Sep 2009
Maersk Line is named Sustainable Shipping Operator of The Year for challenging the shipping industry and bringing about significant reductions in energy consumption and emissions.

The award, presented by Sustainable Shipping, was given to Maersk Line in recognition of the efforts it has made in reducing the environmental impact of its business operations. Maersk Line has proved that the two-stroke engines on its container vessels are able to run continuously at low loads ensuring a more flexible and energy-efficient vessel operation.

In 2007, Maersk Line initiated a comprehensive study on 110 vessels, which shows that despite traditional policy on 40-60% as minimum engine load, it is safe to go as low as 10%. This makes it possible for containerships to sail at half speed, thereby not only significantly reducing fuel costs, but also CO2 emissions.

Being able to select any given speed down to 10% engine load, enables a more flexible voyage and schedule planning as well as vessel savings amounting to 10-30% fuel and CO2. For a post-Panamax container ship it amounts to saving USD 1 million equal to 3,500 tonnes fuel and 10,000 tonnes CO2 per year. More than 100 Maersk Line vessels have utilised super slow steaming since 2007, and the entire fleet is now capable of sailing at this new low speed.

"Whenever we are able to cut fuel consumption we achieve two things at the same time: We lower our emissions of greenhouse gases and we save costs. This really has a lot of potential for us," says Robert Kledal, Vice President and Head of Products in Maersk Line. This fits with the in 1946 formulated company values: “No loss should hit us which can be avoided with constant care, this must be a watchword throughout the entire organization,” the saying of A.P. Moller, founder of the company.