Sardex: A Local Currency for a Thriving Community

A local initiative with global implications 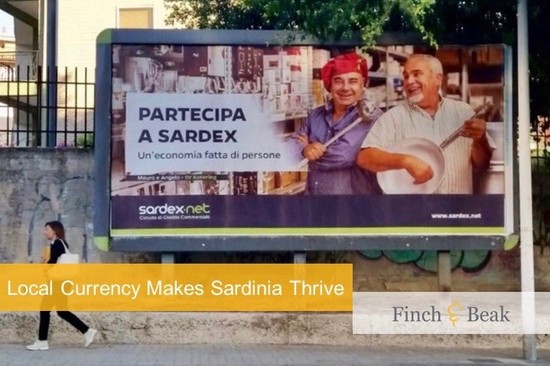 Enlarge
Publ. date 4 Jun 2018
As part of their round-the-world sailing trip in search of sustainable solutions, the Sailors for Sustainability visited Sardinia. During the financial crisis in 2008, the credit flow dried up and unemployment was on the rise, also in Sardinia. In response, five young men from the Sardinian village of Serramanna set up the Sardex, a local currency for businesses in Sardinia. How does it work?

A simple idea for fulfilling potential

As trust in the local community is important for success, the region where the Sardex can be used is limited to Sardinia. Since the Sardex only exists digitally, it is possible for participants to have a negative amount on their Sardex account. And because companies can only use the Sardex to pay other participating companies, spending in Sardex increases regional trade and employment.

Bringing your own money into circulation, is that allowed?

The idea behind Sardex is simple, yet triggers many questions. Does the government allow it? Lorenzo: “Yes. Sardex is legally permitted as a means of digital payment under Italian law. VAT is also paid on the transactions, in euros." All transactions are recorded digitally, so VAT cannot be avoided. It explains why the tax authorities are also happy. They, too, benefit from the increased Sardinian productivity. To keep things simple, the Sardex is worth as much as the euro, but cannot be bought or exchanged for euros.

Who plays the bank?

The Sailors also want to know who is in control of the amount of Sardex in the system. Lorenzo continues: "Here at Sardex HQ we set limits on the positive and negative balance that a participating company can have. Those limits depend on the size of the company. The sum of all the accounts of all participants is always zero.” So participants cannot abuse the system by only drawing credit, we wonder? "No, we keep an eye on that. And we help companies with negative balances to get extra customers. We link these to other Sardex participants, for example those with a large positive balance.”

The Sailors join Lorenzo behind a computer screen and get a live demonstration with a dummy Sardex account. We see different debit and credit transactions, and a total balance of the account is visible. It looks just like regular internet banking, except that it is in Sardex. What is missing is an interest rate. “That's right, because we neither pay nor charge interest.”

No interest? Lorenzo continues: "Sardex is just a medium of exchange that stimulates transactions in the local economy. It is not intended to store value or to obtain interest-driven capital growth." As a result, there is no need for more and more Sardex to meet interest obligations. That is a difference with the "ordinary" money system, where exponential growth of the total amount of money in circulation is necessary for that reason. In order to cover its costs, Sardex HQ charges participating companies a registration fee and an annual fee.

The success of Sardex

Still, the Sardex has proven to be successful. More than 4,000 companies now participate, and since its inception, some €140 million in turnover has been made in Sardex. As a privately-owned company, Sardex now employs around 60 people. Following Sardex’s success, similar money systems have been set up in other Italian regions such as Rome and Piedmont. And the Sardex will also become available to private individuals that live on the island.

Back at the anchorage, the Sailors reflect on the sustainable aspects of Sardex. It increases local services and production activities. As a result, less transport is required and employment on the island is stimulated. Those are clear and quantifiable benefits. By encouraging transactions within the community, Sardex also strengthens cooperation and trust. Although the effects thereof cannot be measured easily, they should not be neglected.

The Sardex makes the local economy more resilient against shocks of future financial crises. After all, the business community is no longer dependent on the availability of euros. And because it is not possible to speculate with the Sardex, the local currency is immune to debt-crises. Finally, the absence of interest has an important advantage: growth to meet interest payment obligations is not a necessity. For these reasons, a currency like the Sardex seems to fit better within a circular economy than the "ordinary" money system.

Have a sip
In search of sustainable solutions around the world